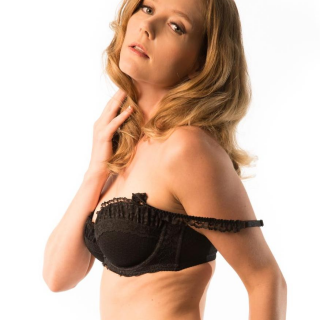 Catwoman (Star Nine) never stays caged for long, even in this jail cell she reclines, examining her claws, waiting to strike. Her chance for escape comes soon as bored prison guard Dixie Comet makes her rounds. Catwoman is easily able to tempt Dixie with promises of riches, if only she could return her personal effects. Dixie takes the bait and soon Catwoman is in possession of her glittering jeweled necklace. She shows it off through the bars, swinging it in Dixie's line of sight.

Soon the skeptical prison guard has joined Catwoman in her cell. She strips down at Catwoman's suggestion & then finds herself mindlessly eating the villain's pussy. She doesn't snap out of her trance until Catwoman is ready to go. The guard suddenly finds herself wearing the hideous orange jumpsuit that is standard issue for all inmates. She frowns as Catwoman taunts her, calling her a little piggy, but there is nothing she can do as Catwoman locks her in the cell and stalks off to freedom and riches.