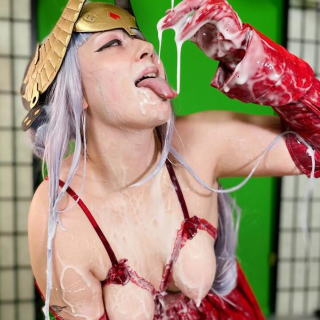 You're so lucky, after the KDA concert, you were able to sneak out back and come across your Pop Idol, Evelynn! Typically, she's slightly terrifying in her usual garb, but in this Pop Idol outfit she seems less intimidating... You risk talking to her, asking a few questions before embarrassingly blurting out and asking if she has sex with her fans! What a rude question to ask your idol! She is almost disgusted for a moment, but quickly warms up to the taboo idea... Evelynn admits to you that she wore no panties during her show and she exposes herself to you, rubbing her thighs and teasing you. It only makes your cock twitch more, and Evelynn can see that! She decides to over-indulge herself a bit by enjoying your delicious cock, worshipping it so much that her darker, succubus side clicks on! She can't help herself around delicious cock and soon finds that her demon side is taking over as she greedily slurps your dick. She slobbers all over your, moaning and giggling before she gets on top and fucks you! You're in pure ecstasy as evil Evelynn towers over you, her tails whipping in the air as she bounces up and down on your cock. You can't believe it- your favourite idol!!! How could you be so lucky?! Evelynn tells you how you'll become her devoted fanboy, going to each and every concert from now on!! All you have to do is fill her womb up with your yummy cum!