Beating the Panty Pervert (part 2 in a 5 part series) 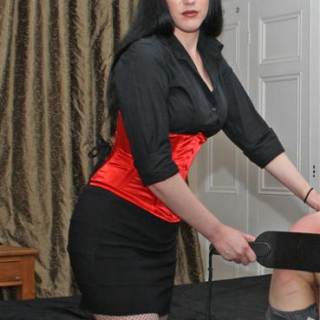 The Panty Pervert continues by struggling to put Mistress Karina's shoes back on - he's not just a pervert, but useless.
Mistress Karina drags him back over the bench and I continue his beating with a leather strap.
During the interrogation it turns out that he was sniffing clean panties, the idiot! He fails even as a pervert.
We're giving him another double hand spanking when Domina Jemma arrives to join us - she is amused by just how stupid and useless he is.
Domina Jemma has a dragon tongue strap and a single tail whip she strikes him with, whilst bemused at how he failed even as a pervert.

Domina Jemma scratches into his back, as she and Mistress Karina return to spanking him.

This part ends as Domina Jemma decides it's about time he was on the floor worshipping us.

This is Part 2 of a 5 Part series. 1 pervert. 3 harsh Mistresses. 45 minutes of punishment and Mistress' pleasure.